Pathfinding portrays the perceptual experiences of memory loss in images combining natural branching phenomenon and scans of neuro-pathways. The collaboration continued for more than a year, Pathfinding was installed at Baycrest Health Sciences in a high-traffic, publicly accessible space. Composited imagery played on an array of vintage TVs, each with its own soundtrack or "voice".

My collaborators include Robin Len, Emad Dabiri, Kang-Il Kim. Robin and Kang have difficulty storing and retrieving new memories (anterograde amnesia) resulting from Acquired Brain Injury (ABI). All four of us have worked as filmmakers/compositors and we drew from this experience, enlisting embodied memory through artistic collaboration. We worked with neuropsychologist Dr. Brian Richards at Baycrest's Memory Link, a program developing assistive technologies and training for people with ABI. In September 2012, our crew relocated from Baycrest to the Social Media and Collaboration Lab (SMAClab) at 230 Richmond West at OCADU.

Pathfinding was installed near the elevators to the Apotex seniors' residence, next to a cafeteria, at the base of a busy elevator and hallway. The "Water Cooler" space is designated for curatorial projects, but was conscripted into use as a flu shot clinic before our show. To adapt, we covered floor-to-ceiling windows facing a driveway and stockpiled leftover office storage units, working around harsh overhead lighting and a pillar as best we could.

The Pathfinding opening featured live music by soundtrack composer Paul Geldart using Ableton. There was a good turnout from OCAD University and from Brain Injury Services of Hamilton, who made it possible for Robin Len to participate, regularly transporting him to and from Toronto by taxi with his personal care worker. Robin and Kang-Il Kim's families were there, as well as Baycrest curators, and clinical practitioners from Memory Link. Print designer Shannon Griffiths attended, as well as artists from Toronto and Hamilton where Robin now lives.

Most days, I went to "sit" the exhibition during the two weeks it was up. Audiences changed depending on the time of day. Up until lunch, the vintage TVs distracted people in the nearby Second Cup coffee kiosk. People paused along what is a kind of interior thoroughfare. Most were members of the Baycrest community â€“ staff, clinical practitioners, orderlies, nurses, researchers, security personnel and visitors.

Later in the day, long-term residents approached in walkers, wheelchairs or mobile stretchers, some with Alzheimer's or dementia, accompanied by family members and personal care workers. They happened upon Pathfinding during routine expeditions to the first floor, or en route to the weekly bingo game or sing-along. Some parked their wheelchairs and gazed at the familiar TVs, as if looking through windows at an ambient landscape of composited imagery - flowers, brain scans, natural branching phenomena, neuro-pathways, backyard Buddhas, test patterns and colour bars. Each TV played its own soundtrack; altogether, the sound is wave-like, atonal and rather soothing. We chose to use crowd-sourced old TVs rather projectors or flat-screens in part to evoke embodied memories of domestic space. I think this put residents at ease.

Remarks included: "When does this start?", "Who is this for?" and "That old TV has life in it yet!".

Baycrest's first floor is dense with imagery - a large collection of contemporary painting, sculpture and crafts, alongside way-finding signage and donor walls, flat-screens and banners promoting Baycrest's research on aging well. When visiting, Gendai curator Yan Wu noted that this visual density â€“ art, signage and documentations of Baycrest's research activities - can be confusing, especially when one has a cognitive impairment.

Baycrest curators Bianca Stern and Aviva Babins intend to promote engagement, discussion and novel experiences for Baycrest residents and clients. Pathfinding was kind of a case study. The curators felt compelled to situate the exhibition in an institutional framework including problem-solving around aging, extensibility of research and commercialization potential. They took steps to ensure that the work would not upset or confuse residents and other Baycrest stakeholders.

It's crucial and revealing for artists to "sit" installations in health settings, where artworks of this type are novel. To disappear after the opening would be unwise. Discussion with viewers and negotiation of meaning within the institutional framework is an essential relational component. Things occur that artists respond to. For example, an expository poster about the work appeared on a tripod in the middle of the installation one day; the artists moved it to the side. The next day, the poster was back in the middle of the monitors; again, the artists moved it to the side. More than just strategic adjustments, our relational approach engaged performativity (sewing the curtains onsite in the exhibition space), dialogue about the work with passers-by, and simple co-presence (sitting quietly together with residents in the space). This "sitting" process reassured, challenged and engaged people who might otherwise find the work befuddling.

Pathfinding subsequently showed at the Disrupting/Undoing exhibition at the Inclusive Design Institute at OCAD U and will show again in September at HAVN (Hamilton Audio Visual Node) in Hamilton. This artist-run centre focuses on new media. Working with the youthful artists (including INTM students from OCAD U) SMAClab and HAVN are developing a "franchise" or extension of our collaborative approach in Hamilton where Robin Len lives in a group home for ABI clients.

For the Pathfinding exhibition at Baycrest, we gratefully acknowledge support from the Ontario Arts Council Artists in the Community and Workplace program. 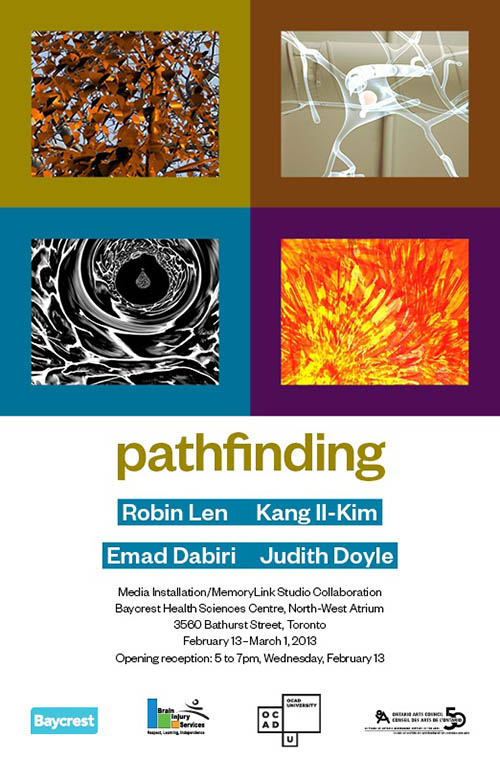 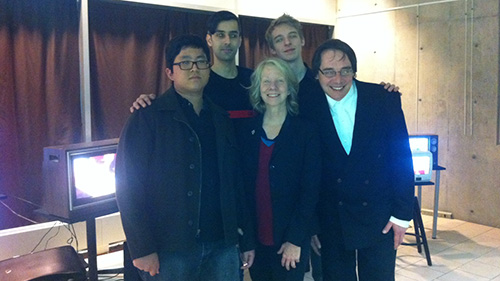 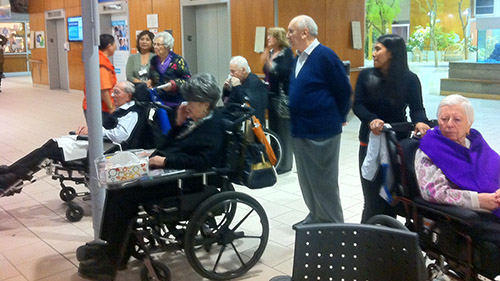