Judith Doyle, Chao Feng, Nick Beirne
Ongoing
PointCloud is a responsive large-scale interactive media installation. Sited in a street window or on an architecture facade, the display utilizes a point cloud surface impression obtained using depth cameras facing the street through the window glass. Though influenced by the gestural movement of people who approach or pass by, the procedurally and algorithmically generated agents in PointCloud are independently life-like and act autonomously. The agents reflect and disrupt spectators, referencing the digitally mediated urban surroundings.

October, 2014
This 2 minute video documents the prototype of the PointCloud media install at Nuit Blanche 2014, in the Queen Mother Cafe in Toronto, created by Judith Doyle and Chao Feng, curated by Earl Miller. Manifesting procedural aesthetics, PointCloud is a speculative mirror machine within which to explore how the physical and digital mesh together. PointCloud both displays and cloaks figures in the surface impressions it generates, supporting post-human embodiment, new forms of gender and of agency over self-presentation (a virtual veil as observed by a workshop participant in Dubai). Intimate encounters occur in this algorithmically inhabited environment.


Judith Doyle and students at Zayed University explore the PointCloud application created by Doyle with Chao Feng and Nick Beirne at the Social Media and Collaboration Lab at OCADU. The workshop is part of the International Symposium of Electronic Arts (ISEA 2015).


In this 2 minute video Judith Doyle explains some of the features of the PointCloud depth camera/projector application she is developing with lead programmer Nick Beirne.


It was observed that the machines constrained and directed the body, leading to the evolution of discernible gesture sets in terms of motion paths. The observed gestural motion paths were either linear, oscillatory or circular. Some were repetitive and looping. Many of these man-machine activities were performed so repeatedly, the workers at the factory had seemingly evolved their own gestural language which is used to augment or in some situations, replace verbal communication. For instance, some of the explanatory gestures that were observed seemed to emulate both hand and machine without actually touching the machine. This form of communication presents itself as a preferred mode in the noisy environment of the bustling factory floor where it's difficult to make out voices. 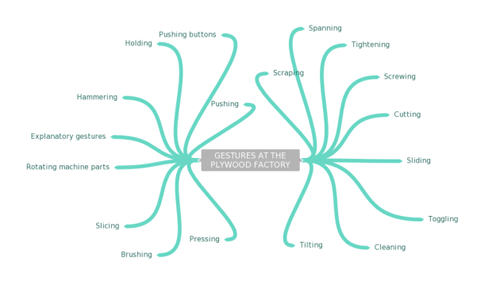 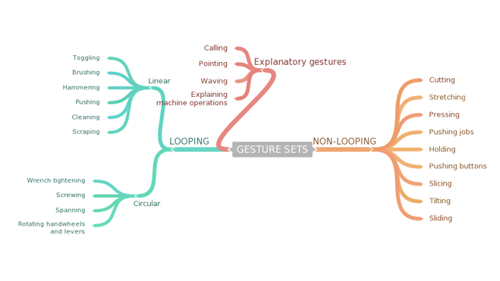 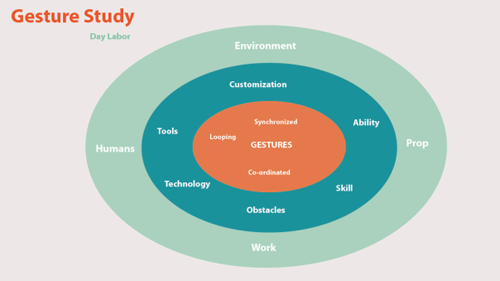